“O Mankind, keep your duty to your Lord who created you from a single soul and from it created its mate (of same kind) and from them twain has spread a multitude of men and women…”. [Noble Quran 4:1]

“He (God) it is who did create you from a single soul and therefrom did create his mate, that he might dwell with her (in love)…” [Noble Quran 7:189]

“The Creator of heavens and earth: He has made for you pairs from among yourselves” [Noble Quran 42:11]

“And Allah has given you mates of your own nature, and has given you from your mates, children and grandchildren, and has made provision of good things for you. Is it then in vanity that they believe and in the grace of God that they disbelieve?” [Noble Quran 16:72]

And their Lord responded to them, “Never will I allow to be lost the work of [any] worker among you, whether male or female; you are of one another. So those who emigrated or were evicted from their homes or were harmed in My cause or fought or were killed – I will surely remove from them their misdeeds, and I will surely admit them to gardens beneath which rivers flow as reward from Allah , and Allah has with Him the best reward.”

“Whoever works righteousness, man or woman, and has faith, verily to him will We give a new life that is good and pure, and We will bestow on such their reward according to their actions.” [Noble Quran 16:97 ]
Woman according to the Quran is not blamed for Adam’s first mistake. Both were jointly wrong in their disobedience to God, both repented, and both were forgiven. [Noble Quran 2:36]

And whoever does righteous deeds, whether male or female, while being a believer – those will enter Paradise and will not be wronged, [even as much as] the speck on a date seed.

And when one of them is informed of [the birth of] a female, his face becomes dark, and he suppresses grief.

He hides himself from the people because of the ill of which he has been informed. Should he keep it in humiliation or bury it in the ground? Unquestionably, evil is what they decide.

“And among His signs is this: That He created mates for you from yourselves that you may find rest, peace of mind in them, and He ordained between you love and mercy. Lo, herein indeed are signs for people who reflect.” [Noble Quran 30:21]

And of His signs is that He created for you from yourselves mates that you may find tranquillity in them; and He placed between you affection and mercy. Indeed in that are signs for a people who give thought.

According to Islamic Law, women cannot be forced to marry anyone without their consent.
Ibn ‘Abbas reported that a girl came to the Messenger of God, Muhammad (peace and blessings be upon him), and she reported that her father had forced her to marry without her consent. The Messenger of God gave her the choice… (between accepting the marriage or invalidating it). [Ibn Hanbal No. 2469]
Prophet Muhammad (peace and blessings be upon him) said:

“The best of you is the best to his family and I am the best among you to my family.”

The most perfect believers are the best in conduct and best of you are those who are best to their wives. [Ibn-Hanbal, No. 7396]

Divorced women remain in waiting for three periods, and it is not lawful for them to conceal what Allah has created in their wombs if they believe in Allah and the Last Day. And their husbands have more right to take them back in this [period] if they want reconciliation. And due to the wives is similar to what is expected of them, according to what is reasonable. But the men have a degree over them [in responsibility and authority]. And Allah is Exalted in Might and Wise. 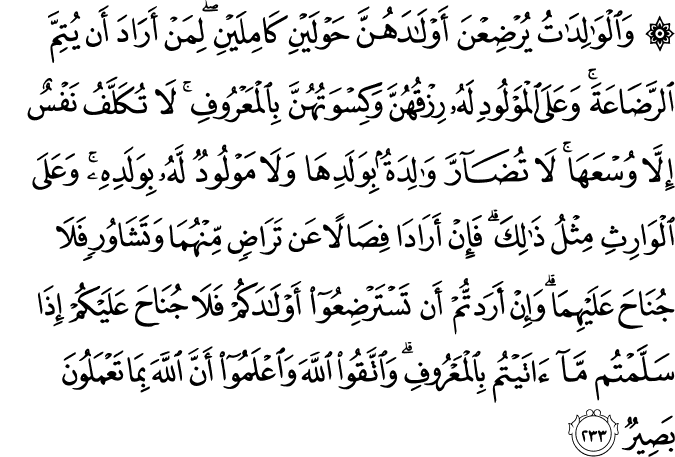 Mothers may breastfeed their children two complete years for whoever wishes to complete the nursing [period]. Upon the father is the mothers’ provision and their clothing according to what is acceptable. No person is charged with more than his capacity. No mother should be harmed through her child, and no father through his child. And upon the [father’s] heir is [a duty] like that [of the father]. And if they both desire weaning through mutual consent from both of them and consultation, there is no blame upon either of them. And if you wish to have your children nursed by a substitute, there is no blame upon you as long as you give payment according to what is acceptable. And fear Allah and know that Allah is Seeing of what you do.

O you who have believed, it is not lawful for you to inherit women by compulsion. And do not make difficulties for them in order to take [back] part of what you gave them unless they commit a clear immorality. And live with them in kindness. For if you dislike them – perhaps you dislike a thing and Allah makes therein much good.

And We have enjoined upon man [care] for his parents. His mother carried him, [increasing her] in weakness upon weakness, and his weaning is in two years. Be grateful to Me and to your parents; to Me is the [final] destination.

And your Lord has decreed that you not worship except Him, and to parents, good treatment. Whether one or both of them reach old age [while] with you, say not to them [so much as], “uff,” and do not repel them but speak to them a noble word.

And We have enjoined upon man, to his parents, good treatment. His mother carried him with hardship and gave birth to him with hardship, and his gestation and weaning [period] is thirty months. [He grows] until, when he reaches maturity and reaches [the age of] forty years, he says, “My Lord, enable me to be grateful for Your favor which You have bestowed upon me and upon my parents and to work righteousness of which You will approve and make righteous for me my offspring. Indeed, I have repented to You, and indeed, I am of the Muslims.”

Surat Al-Mumtaĥanah (She that is to be examined) – سورة الممتحنة

O you who have believed, when the believing women come to you as emigrants, examine them. Allah is most knowing as to their faith. And if you know them to be believers, then do not return them to the disbelievers; they are not lawful [wives] for them, nor are they lawful [husbands] for them. But give the disbelievers what they have spent. And there is no blame upon you if you marry them when you have given them their due compensation. And hold not to marriage bonds with disbelieving women, but ask for what you have spent and let them ask for what they have spent. That is the judgement of Allah ; He judges between you. And Allah is Knowing and Wise.

And if you have lost any of your wives to the disbelievers and you subsequently obtain [something], then give those whose wives have gone the equivalent of what they had spent. And fear Allah , in whom you are believers.

O Prophet, when the believing women come to you pledging to you that they will not associate anything with Allah , nor will they steal, nor will they commit unlawful sexual intercourse, nor will they kill their children, nor will they bring forth a slander they have invented between their arms and legs, nor will they disobey you in what is right – then accept their pledge and ask forgiveness for them of Allah . Indeed, Allah is Forgiving and Merciful.

The Qur’an and Hijab,

“O Prophet, tell your wives and daughters and the

believing women to draw their outer garments around

them (when they go out or are among men). That is

better in order that they may be known (to be Muslims)

“Hijab” or “ḥijāb” (/hɪˈdʒɑːb/, /hɪˈdʒæb/, /ˈhɪ.dʒæb/ or /hɛˈdʒɑːb/; Arabic: حجاب‎, pronounced [ħiˈdʒæːb] ~ [ħiˈɡæːb]) is a veilthat covers the head and chest, which is particularly worn by a Muslim female beyond the age of puberty in the presence of adultmales. It can further refer to any head, face, or body covering worn by Muslim women that conforms to a certain standard ofmodesty. It not only refers to the physical body covering, but also embodies a metaphysical dimension, where al-hijab refers to “the veil which separates man or the world from God.” Hijab can also be used to refer to the seclusion of women from men in the public sphere. Most often, it is worn by Muslim women as a symbol of modesty, privacy and morality.

According to the Encyclopedia of Islam and the Muslim World, modesty in the Qur’an concerns both men’s and women’s gaze, gait, garments, and genitalia.”

Famous and notable women in Islam